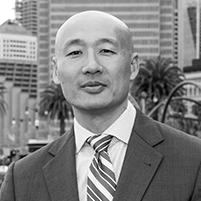 Mr. Luk is an experienced trial attorney who has litigated bench and jury trials to defense verdicts in federal and state courts and arbitrations to verdicts on behalf of plaintiffs. He has also successfully represented clients in international arbitration and mediation. Mr. Luk is admitted to practice law in all of the state and federal courts of California.

Prior to joining CWL, Mr. Luk attained the rank of Captain serving in the United States Marine Corps. Mr. Luk litigated felony and misdemeanor jury and bench trials and administrative hearings as the Chief District Attorney and then as the Senior Public Defender for Marine Corps Air Station, New River. Mr. Luk prosecuted and defended Marines and Sailors charged with homicide, sex related offenses, larceny, drug distribution, and various other offenses. Upon completion of service, Mr. Luk was awarded the National Defense Service Medal and the Navy and Marine Corps Achievement Medal.

While in law school, Mr. Luk served as a judicial extern to the Honorable Christopher Klein, U.S. Bankruptcy Judge and as an associate editor for the Journal of International Law and Policy.