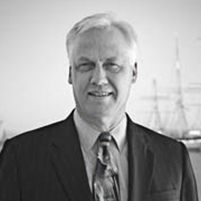 Mr. Rupert P. Hansen is a founding partner of CWL. Prior to joining Cox Wootton Lerner, Mr. Hansen was a partner with the international law firm of Graham & James, LLP in San Francisco.

Mr. Hansen represents a variety of business interests, including financial institutions, developers, entrepreneurs, superyacht owners, shipping liners, property owners, construction companies, manufacturers, and transportation concerns. He has experience as lead counsel in complex trials and appellate matters in both federal and state courts, as well as in international arbitration. Mr. Hansen also engages in transactional and finance work, and is regularly called upon to serve as a mediator and arbitrator within the areas of his expertise. He is frequently retained by large law firms to assist them and their clients in transactions having complicated components of maritime finance or shipping regulation. Mr. Hansen has also testified as an expert witness on marine insurance and vessel emissions regulation.

Mr. Hansen has been practicing law for nearly thirty years. He is “A.V.” rated with the Martindale-Hubbell national attorneys’ listing, and has been perennially named one of Northern California’s Super Lawyers by San Francisco Magazine and Northern California Super Lawyers(TM) Magazine. The honor is awarded to those lawyers who are deemed to be among the top 5% of Northern California attorneys, based on input by their peers and independent research conducted by Law & Politics. Mr. Hansen is also listed in Best Lawyers in America, and was recognized in 2009 as one of the Best Lawyers in the Bay Area by the San Francisco Business Times.

Mr. Hansen has 30 years of sailing experience, including racing in California and the Great Lakes, and bareboat chartering throughout California, the Pacific Northwest, the Caribbean and the Mediterranean.