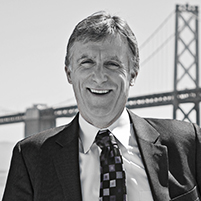 Mr. Richard C. Wootton has been in practice since 1979 and is licensed in both California and Hawaii. He is a founding partner of CWL, formed in 1997, having previously been a partner in two other San Francisco firms. Martindale-Hubbel, the national attorneys’ listing and rating service, has awarded him an “A.V.” rating, representing the highest level of professional excellence and ethical practice. He has regularly been named by his peers and a panel selection committee as a Northern California Super Lawyer as published by San Francisco Magazine and Northern California Super Lawyers Magazine. He is also listed in Best Lawyers in America, and in 2009 was named one of the Best Lawyers in the Bay Area by the San Francisco Business Times.

Mr. Wootton represents a wide range of business owners and employers, including land and marine-based contractors and construction firms, tug and barge companies, salvage and commercial diving companies, stevedores, and transportation businesses. He provides business advice in contract review and negotiation, employment issues (drafting manuals and directing investigation of disputes), and regulatory matters, and is recognized for his litigation skills and trial work. He has served as lead counsel in civil trials, administrative hearings, and appellate matters involving contractual disputes, employment torts, and casualty matters with millions of dollars in issue. His trial record is outstanding, and he brings a positive outlook, sense of humor and perspective to the resolution of his clients’ legal matters.