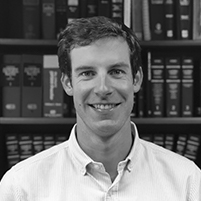 During law school, Mr. Sears externed for the Honorable Laurel Beeler at the U.S. District Court for the Northern District of California. He also completed summer clerkships in the Fraud Section of the U.S. Department of Justice in Washington, D.C and with Baker McKenzie in Hanoi, Vietnam.

Prior to attending law school, Mr. Sears worked as an editor at Oxford University Press in New York. Mr. Sears graduated from the University of Pennsylvania with a bachelor’s degree in Diplomatic History.